This is a story about a big walk, 21 kids, four women, an eagle and a whale. It’s about the trees that hold our memories and the steps that connected us to ancestors. It happened on the stretch of country between the zoos at Dubbo and Sydney – nearly 500 kilometres in all – and was brought to life by remarkable children. It will always be their story.

It starts eight years ago when I saw a job in the Koori Mail. It was for someone to work at Taronga Zoo in a new program for Aboriginal kids. The idea was to get the kids in regularly to help with the animals. I threw my hat in. Back then you wouldn’t have called Taronga a place for black kids. The chance to change that appealed to me.

I started working with the team at Taronga, including Lucinda. They quickly understood what this program could do for young people and how those young ones could help the zoo. We called it Burbangana. It means “take my hand and help me up”. We got very busy.

Then I met Janice and her people from FACS. They brought the young people to us. We said yes to them all. It didn’t matter what they brought with them, their history, stories or problems, they were all welcome. We gave them uniforms, an important job and believed in them. And they stepped up - every single time. I am talking about kids who have been hurt or afraid because of adults who have let them down. To see them come through the doors, proud to be a part of us, made me happy. Watching their gentle care with the animals blew my mind.

The program was such a success that we started another one at the Western Plains Zoo in Dubbo. We called it Walanmarra – it means “to make strong now”. It was pretty soon after that I started thinking about a big walk. I wanted to give these young people a chance to understand country, to know Mother Earth, to take safety from nature and to continue a tradition of walking that’s been around since the first sunrise. Our people have always walked to celebrations.

When I heard that Taronga was having its 100th birthday it seemed the perfect chance – what better present could we give! To connect the two zoos by having young people come together to walk the land with different communities offering them safety along the way.

I heard later that some people thought we were mad. Others doubted the kids could do it. The hard bit was never about getting the kids across the line - it was about taking the adults there with us.

The four of us started the planning in earnest. We all had our part to play. Lucinda had to think about the zoos. Janice and her people were tireless on the detail; they had to plan for every young person. Kirsty and I had to think about the country and finding the communities and elders who could welcome us and strengthen our journey. It went on forever - we wanted to be prepared for everything, from hunger to blisters to snake bites. The idea to involve schools along the way was a good one. It meant connection to communities, giving our young people a chance to be celebrated. We loved the thought of all of us sleeping in rows, for safety and togetherness, in little country school halls. It just felt right.

Then it was time to start. Leaving Dubbo was emotional. We were restless the night before, weighted with the burden of being strong for everyone. And then at our send off one of the local Elders came to welcome us. She only had eyes for the young ones; she was giving them her blessing to walk on her land, strong women’s country. She entrusted her hopes into them and her protection. I could feel her belief in those children. It was then I knew everything would be alright. 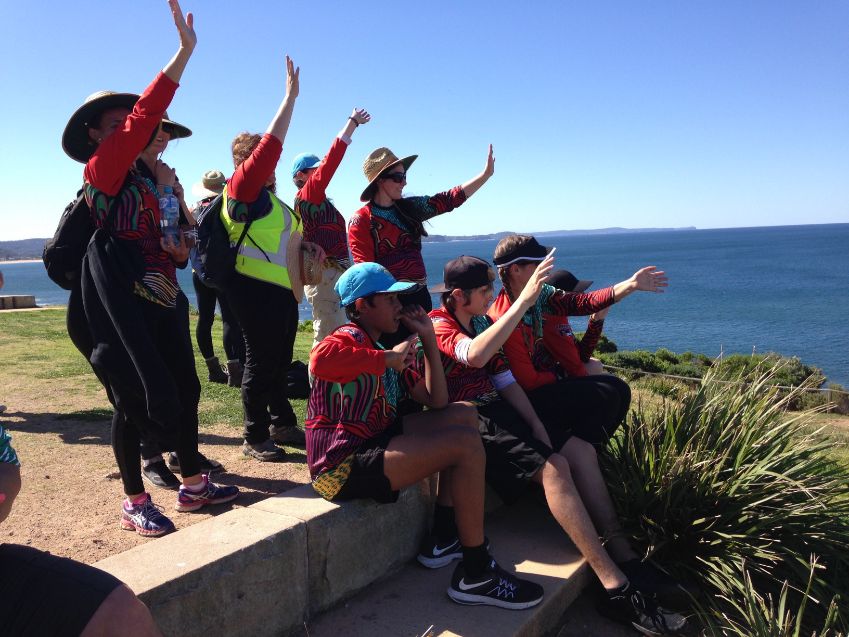 And the walking began. We walked and we walked. We walked in silence, we walked with chatter, and we walked close together or spread far apart. We all agree that we were at our best when we were walking. We found our rhythm and it was an amazing feeling. Everyone was equal on the road.

There were so many memorable moments – the day it rained for hours and we arrived drenched at one little school. It was the first and only night that those mats on the floor didn't seem so good. We turned around, dripped our way back to town and booked every room in the local motel on Janice’s FACS account. Never has it been so easy to get kids to take a hot shower!

Then there was the day a local farmer helped us across some flooded areas by stacking kids in the back of his ute, and that break from sausages on the night Lucinda’s family met us with big bowls of spaghetti bolognaise and pavlova. There were the dances around the fire at dusk and the talk of young people who had time and space to tell their stories or just the sounds of the bush and the quiet solidarity of tired walkers which brought its own form of healing.

One of the Elders we met along the way taught us about those in the animal world who would look out for us - especially the animals we call creator beings. He told us we would be taken care of by the eagle as we came from the west and the whale when we hit Sydney harbour in the east. Of course we saw them – it was meant to be. No one was surprised when that big wedgie spread his wings as he flew overhead. We adults sat in silence and wonder. Then there was that mother whale when we hit the beach. She flapped her big tail at us and blew her spout, saying welcome to Sydney. The kids waved back and kept walking, taking it in their stride, forming their own meanings. It’s got to be personal, what you take from nature. For me that whale was a moment that will never leave me. I stayed back for a bit to take it in on my own.

How those kids changed as we clocked up those steps. On the last day of the walk and on the day of the zoo’s birthday they all got up at 5am for the sunrise. They did it themselves – some came running out in pyjamas but they were there in line without being asked. We said thank you to grandfather sun that morning – one after the other down the line. Everyone said different things, some chose not to talk, and that was okay. But those voices, the respect and the thanks, I won’t forget in a hurry. We got some hugging going on in that line. It wasn’t planned, it just happened - everyone hugging each other down the row, our time together before we headed off up that hill to the finish line at Taronga.

The best thing for me was that ending. The ones who had nothing gave the ones with everything something they have never had. Just before we arrived, the zoo put out a call on the loudspeaker for everyone to hear. It was packed that day because it was school holidays and the announcement invited all to come out and cheer us as we arrived. Those onlookers saw something too great for words, they saw something of themselves in our kids and they knew something had been done on their behalf. No wonder we were crying.

I miss the bush already. Every one of those young people is still in my mind. I am thinking about what’s next and I know Lucinda, Kirsty and Janice are too. We had our different roles before we started – the walk changed all that. We are the best sort of team now. We have done earth and now I am thinking about water – maybe a canoe trip on the Murray to Adelaide. I know the kids could do it.

I don’t think I will ever be the same. I feel so very privileged to have been part of it. The kids we took were a diverse bunch. They have all had the rough end of the stick – some kids’ experiences have been so hard, their resilience is inspiring. The little ones who started at Dubbo were amazing, their carers were there waving them off, proud as punch. They didn’t walk the whole way but they met us at the end to walk Sydney harbour - they were with us to thank grandfather sun and they were welcomed by the mother whale. Some of those kids had never seen the sea before. Their eyes just popped. I have never seen Sydney as beautiful as it was that day - it gave the backdrop for those memories.

The older kids who joined us along the way proved our belief in them. We saw kids transform and achieve more than they thought possible. We had kids who had had recent police involvement, kids who had been recently hurt and kids without permanent homes. We saw those children connect with themselves and with others. They faced their fears and excelled. Their bravery knows no bounds. What a foundation for them to build on! Some of the kid’s experiences will stay with me forever.

When we finished the CEO of Taronga welcomed the young people. He gathered everyone up and told them that they will always be safe at Taronga. I know he meant it.

You can’t really find the words to describe the gift of connection and culture - especially for children who have had their stores of trust eroded by hurt. For them to have an experience to connect to country, to give over to something strong and protective and to feel safe is the best we can do. It’s a gift that will last a lifetime.

I have no doubt that there will be more journeys. We have so much to learn from the land and the kids who belong on it. And yes of course I’ll get in a canoe.

When people hear the phrase “public sector innovation” if they don’t draw a blank entirely they tend to think about things that are big and complex.

Our partnership with Taronga is a brilliant example of public sector innovation.

Think about it. Scientists, conservationists, social workers and youth workers combining in a completely novel way to give something wonderful to kids in care.

The walk from Dubbo to Taronga is just the latest – but definitely the most bodacious - opportunity for our youngsters to emerge from the partnership.

A statement of belief by the dedicated people who organised it in the young people who took part, in each other and in the warmth of the reception the kids would receive along the way.

It showed what kids in care can achieve and just how many people want them to do well.